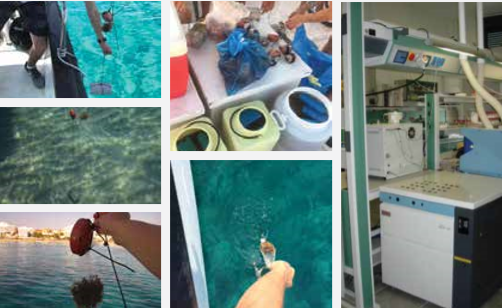 The studying phase of the BLUEISLANDS project, started in January 2017, ended last December 2018. During this fruitful phase, various activities have been carried out in order to assess the impact of tourism on the waste generated on eight islands of the Mediterranean Sea. Different aspects of this issue have been investigated, such as the marine litter generated and its accumulation on sandy beaches, the enrichment of coastal waters by nutrients of anthropogenic origin and the waste generated by tourist accommodation establishments (TAEs). The analysis is clear: the seasonal increase of the population during the high touristic season, on the Mediterranean islands, is associated to an increase of the waste generated, representing a challenge for the local authorities.

During the high season, the accumulation of marine litter is on average multiplied by 2.62 on the touristic beaches, 2.35 on the beaches mainly used by locals and 1.54 on the remote beaches compared to the low season. Amongst the most common items, cigarette butts and pieces of plastic, including micro- (<0.5 cm), meso- (0.5 – 2.5 cm) and macroplastics (>2.5 cm), represent on average more than 70% of the marine litter. In this context, an accumulation index has been defined, taking into account the number of items, the surface sampled and the time elapsed between the monitoring and the last cleaning of the beach. This index allows to better assess the dynamics of the marine litter on the selected beaches.

Through short term in situ experiment, the impact of tourism on the contamination of marine coastal areas by nutrients of anthropogenic origin has been tested on three islands. This contamination is related to the increase of organic and nutrients load as a result of an increase of sewage discharge. The latter is linked to the population rise during the high season. The experiments including control sites, with negligible tourism activities, and impact sites with many tourist activities and facilities, were conducted during both the low and high seasons. Although no dramatic extent of anthropic input was detected in the investigated sites, specific strategies will be proposed and adopted in order to further limit input of anthropic nutrients in the marine coastal areas, which so far seem mainly driven by the presence of bathers and recreational boats.

Finally, the amount of waste generated by the TAEs situated behind the selected beaches where the marine litter surveys were conducted, show a clear seasonal pattern with on average higher amounts of waste collected during July and August for the sites mainly used by locals and from June to September for the touristic sites.

The outputs of these three activities highlight the impact of tourism on the different issues investigated and are used as inputs for a decision tool specifically designed to address each issue (beach littering, marine coastal waters contamination and waste generated by TAEs) and help local authorities to face the seasonal increase of waste generation as an effect of tourism. This tool is now used in the frame of the testing phase of the project and pilot actions will start in June 2019.