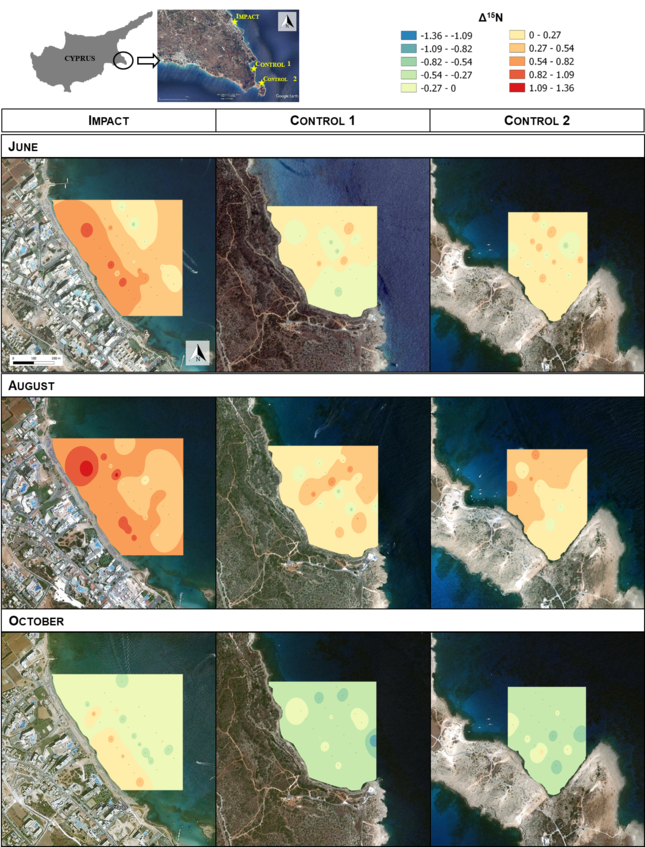 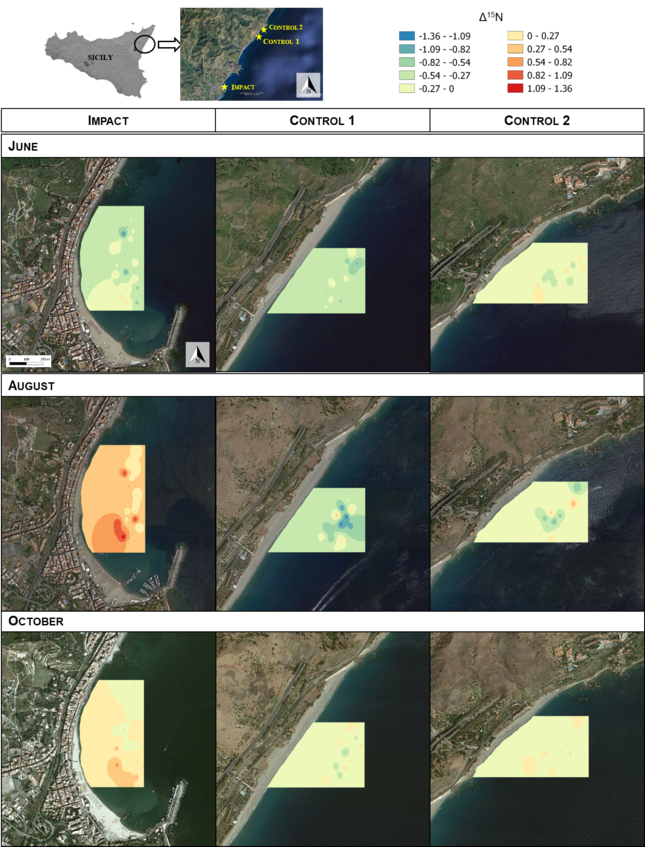 Monitoring of the quality of coastal seawater was carried out to evaluate the presence and distribution of anthropogenic nutrients.

Monitoring of the quality of coastal seawater was carried out in Cyprus and Sicily (Italy) by CoNISMa (National Inter-University Consortium for Marine Sciences, Italy) through short-term macroalgae deployments to evaluate the presence and distribution of anthropogenic nutrients. In both islands, three study sites were selected in order to compare one potential impacted site (e.g. featured by large tourist infrastructures, popular beaches, wastewater treatment plants) that experiences a sharp increase in population density during the tourist peak, hereafter called Impact site; with two coastal sites where tourist activities and variation in population density throughout the year are negligible, hereafter called Control 1 and Control 2 sites. These study sites were monitored during three periods (June, August, and October 2017) characterized by different tourism flows.

Here we present Δ15N results in geo-referenced maps showing the occurrence, extent and seasonal variation of plumes of 15N-enriched nutrients, suggesting the presence of anthropogenic input. Δ15N values were ranked into 10 classes (corresponding to different colours) across all sites and periods, so that colour contours indicate the occurrence and the extent of plumes of anthropogenic (positive values; warm colour scale) vs. natural (negative values; cold colour scale) nutrients in the coastal sites over the experimental periods.

In Sicily, a different seasonal pattern was highlighted in the Δ15N maps (Fig. 2): anthropogenic nutrients were detected only in the summer period (August) in the Impact site, where the dominance of orange/red contours indicates an increase in anthropogenic nutrients in seawater. In particular, points closer to the coastline showed more intense orange/red colour, revealing the coastal origin of nutrients. Then, in October, anthropogenic influence is reduced and restricted to the southern part of the bay. In contrast, the diffused green/blue contours in June in all sites and in the other two periods in both Control sites indicate the dominance of nutrients of natural origin.

In spite of the spatial and temporal patterns highlighted and of the low turnover and growth rates of the investigated microalga species, it must be pointed out that the variations in Δ15N among sites and periods were overall of low extent in both islands (Δ15N: -1.2 to 1.4‰), suggesting only a slight enrichment of anthropogenic nutrients in the studied coastal areas and especially in highly tourist sites, and a limited influence of anthropogenic activities on nutrient input in coastal seawater.

Marine litter increases by 205% during the...