The alarming spread of microplastics 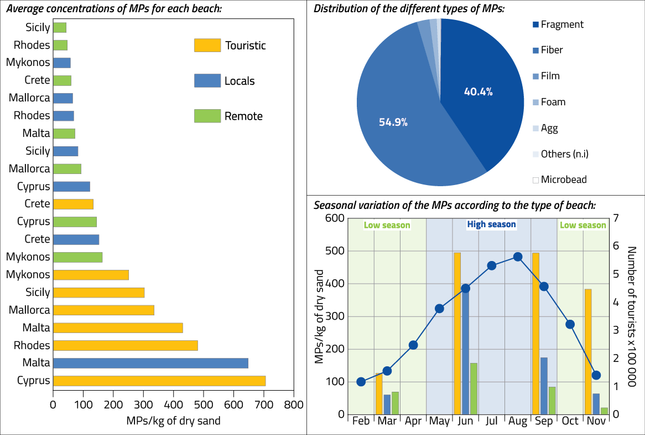 Analysis of sand shows all beaches now contaminated to some degree

In parallel to the marine litter surveys conducted in 2017 on the 24 beaches of the 8 islands of the BLUEISLANDS project, sand samples were also periodically collected to quantify and characterise the microplastics (MPs) present in the sand. The samples were processed and analysed at the ICTA-UAB (Barcelona, Spain) in a dedicated clean laboratory in order to avoid contamination from airborne particles. So far, the samples of 21 beaches from 7 islands were examined. The analysis revealed that, without exception, all the beaches were contaminated with microplastics.

This result confirm observations made at a global scale: the MPs are now found everywhere, even in the most remote places. The average concentration of particles found in all the samples of the 21 beaches is of 212.8 MPs/kg of dry sand and is in line with previous studies conducted on beaches of the Mediterranean Sea. More in detail, the concentrations show huge variation from one beach to another as the highest concentrations recorded are on average 16 times higher than the lowest ones: the lowest average value was found at the remote beach of Sicily (Fondaco Parrino, 43.8 MPs/kg of dry sand) while the highest at the touristic beach of Cyprus (Sunrise Beach, 707.5 MPs/kg of dry sand). The results clearly show that the touristic beaches are the most affected by MPs contamination as 6 of them are found in the top 10, followed by the beaches mainly used by locals and the more remote ones.

The analysis also revealed that the particles can be divided into 6 categories (if we exclude the unidentified particles suspected to be MPs): fragments, fibres, films, foams, aggregates and microbeads. Among these categories, two largely dominate: the fibres and the fragments as they represent respectively 54.9% and 40.4% of all the particles collected, all the others types representing less than 5% of the total. As the fragments derive from the degradation of larger plastic items due to their exposure to physical, chemical and biological processes, it would be theoretically conceivable to limit their amount by preventing the disposal of larger plastic items in the environment. On the other hand, limiting the amount of fibres appears to be almost impossible as most of them derive from clothing items.

Finally, the most interesting result of this analysis is probably the fact that no matter the type of beach we consider, the amount of MPs found in the sand shows a clear seasonal pattern, with higher concentrations during the high touristic season and lower concentrations during the low season. This is clearly related to the seasonal variation of the number of visitors on each beach. It is quite clear that higher human concentrations, during the high season, will lead to an increased release of fibres into the environment (beach, sea water, or atmosphere). Moreover, the fragmentation of larger plastic items, present on the beaches, into MPs, is probably accelerated by the seasonal increase of visitors as their activities on the beach will strengthen the abrasive properties of the sand.