Waste Management: The Case of Rhodes 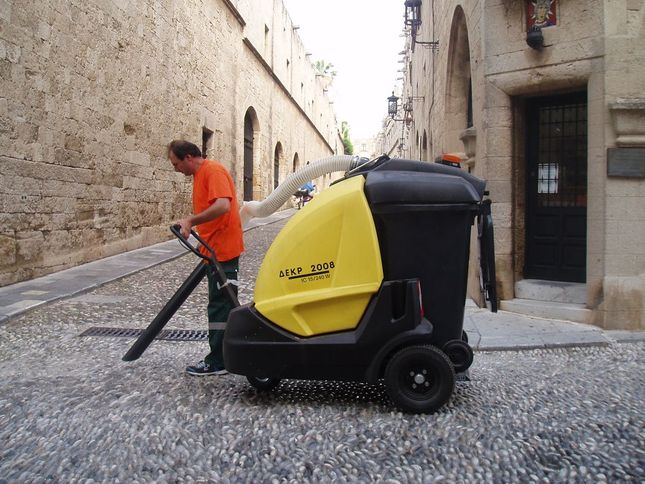 Challenges and opportunities of waste management in touristic hotspots

The Municipality of Rhodes is the local authority of one of the most important touristic destinations in Greece. As a result, the Municipality has to face all the important challenges that tourism poses, including seasonality, increased per capita waste production, and typical waste composition, etc. In addition, Rhodes’s touristic product is based, to a great extent, on large-scale 3S (Sea, Sun, Sand) tourism, which is associated with higher environmental stresses. Despite the efforts that the Municipality is taking to address the important issue of waste management through the implementation of collection and recovery schemes, informational campaigns and so on, there is a lot of room for improvement both on the production side and in terms of the management of waste.

An important aspect of Rhodes, in particular, is its insular nature, which increases the cost and threatens the financial viability of waste management schemes. Reduced waste production will have multiple benefits in Rhodes as an island and the Municipality as an organisation; there will be less need for imported material, while lower per capita waste production would increase the financial sustainability of the management system. In particular, decreased per capita waste production from tourism would ease the need for a large fleet of collection vehicles to cover the increased summer production. This would have a domino effect on all the downstream activities such as recyclables recovery, transportation, disposal, etc. Furthermore, a change in the composition of the waste that would enable greater recyclables recovery and/or easier management of waste would also increase the economic performance of the waste management scheme.

Last but not least, reduction of diffused littering sources and plastic use would greatly support efforts to preserve the natural and cultural capital of Rhodes and with it, its high attractiveness to tourists. The Municipality of Rhodes would benefit from the introduction of tools, methods, techniques and action plans that would ensure that the investment in the tourism sector continues to wield high returns, while at the same time it safeguards the sustainability of the economic activity and the quality of life of the local population.

One of the main issues that the Municipality of Rhodes is facing during the tourist season is the important difference between the overall production of waste between the low and high touristic season. This difference is not only due to the (equivalent) population on the island during the summer months, but also the respective changes in per capita waste production and its composition.
According to the Regional Operational Plan for waste management, for 2014 the overall production of waste between June and July was more than double that of the lowest month in the year, corresponding to the increase of the population by almost 60,000 during the summer months.
Moreover, the per capita waste production in the Municipality of Rhodes for the same year according to the same source reached 513kg/y*person, when the respective average for the EU level was 475kg/y*person. While high per capita waste production is not unique to Rhodes and characterises Greece in general, Rhodes has a higher production level than the average of Greece.

In addition, the composition of waste in the Municipality of Rhodes is different from that of other Greek Regions. According to with the Regional Operational Plans for the waste management of the South Aegean, Central Macedonia and Attica, the organic part of waste in Rhodes is much lower than in the other regions, while plastics are almost double, accounting for as much as 1/5 of the waste. Both of the above are consistent with the literature on the effects of tourism on waste production and highlight the important stresses that the Municipality of Rhodes is facing.

While the main problems in Rhodes are linked with waste production it should also be noted that Greece, in general, has been very slow in developing a comprehensive waste management scheme and has one of the highest percentages of landfilling in Europe. The development of the local waste action plan has been understandably slow but since then the Municipality made important leaps forward. Nevertheless, there are still issues with the development of a second sanitary landfill in the southern part of the island, the development of recycling drop-off centres etc.

Some of the actions needed for the Improvement of waste management in Rhodes include: